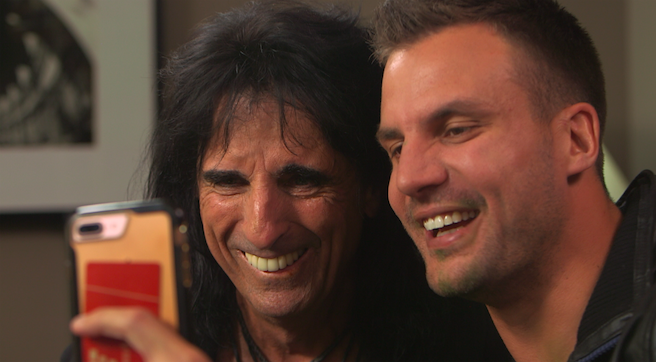 “The Footy Show” is an Australian Logie Award-winning sports variety TV show covering the professional rugby league in Australia. Co-hosted by former rugby star Beau Ryan, a popular segment “Beau Knows” covers a wide range of topics and interviews with celebs. Go To Team‘s Dallas crew, Nate Galluppi and Nate Silverman, had the pleasure of shooting a segment of “Beau Knows” as he worked with Alice Cooper. We interviewed Alice Cooper at his hotel that day, prior to the game. The interview portion was absolutely hilarious. After the match, Cooper had a tremendous performance and met with Beau. Beau and Cooper played a trivia game where a wheel decided your punishment if an answer was incorrect. Cooper had to eat a spoonful of vegemite, and Beau ate deviled ham with a bottle of mystery “poison” in honor of Cooper’s hit song.

The rest of the segment took us on a tour of Dallas. We stopped outside of the Cowboy’s home at AT&T Stadium, where Beau dressed up as the star player for the North Queensland Cowboys for a “man on the street” segment. We did another “man on the street” style segment after with: Grassy Knoll, Deep Ellum, and Klyde Warren Park. For this, Cooper was dressed as a different kind of cowboy. This all made for one hilarious shoot!

With a tight room to work with, we lit the interview with Lite Panels as the key and a Kino 400 as fill. Shooting with a hotel window behind our talent, we used black wrap and curtains to flag the windows and a lamp as a practical behind Cooper to add another layer to get us out of that hotel room. This was shot on the Canon C300 with L-Series lenses and a Canon 5D as the wide two-shot.