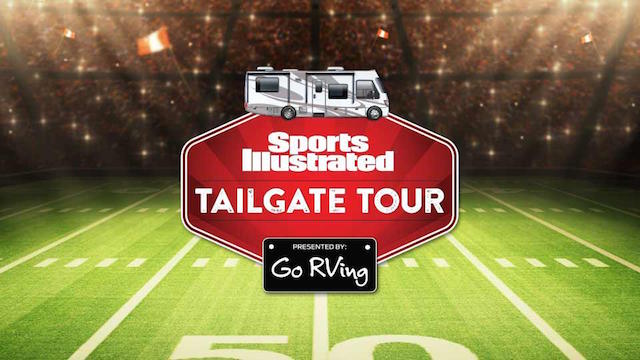 We’ve been covering Sports Illustrated’s Tailgate Tours the last couple of weekends. For the third year in a row, SI teamed up with Go RVing to produce a cross-country tour of some of the most notable college stadiums, and an Assignment Desk crew was there to capture all of the action in each city. During this interactive tour, attendees are invited to play corn hole, learn the history and traditions of the biggest football programs around, get expert game breakdowns from Andy Staples and pick up local flavor from celebrity chefs.

Recently the tour led Assignment Desk Director of Photography, Roy Kurtluyan, to UCLA to film another episode (and get some behind-the-scenes pics for us to share!). Since our crews are also editing the project for SI, Roy and his team made sure to film a ton of extra b-roll for whatever needs the client may have in the future.

On the field, our crews were greeted by the UCLA cheerleaders and past college football stars including, Brendan Ayanbadejo (UCLA) and Andrew Walters (Arizona State). With the sunny California weather, the difficulty to keep noticeable contrast increased. As always, the disparity between light and dark is something cinematographers watch out for so that all shots remain consistent, even as the sun moves. In order to have a shallow depth of field, we used a Canon5Diii. The tour will conclude on Nov. 21 in Columbus, Ohio, when the Ohio State Buckeyes host the Michigan State Spartans in a game that could have national title implications. Follow along to the conversation using #RVTailgateTour.